Nalanda, a large Buddhist monastery, now in ruins, was one of the most publicly acknowledged Mahaviharas of ancient India located in ancient Magadha kingdom (modern Bihar). It remained a learning centre from 7th century BCE through c. 1200 CE and is many a time categorised as one of the early universities of India along with other institutions like ‘Vikramashila’ and ‘Taxila’. The patronage of the Gupta Empire saw this Mahavihara prosper during 5th and 6th century as also during the reign of emperor Harsha of Kannauj. However tantric developments of Buddhism during the Pala rule saw an eventual decline of Nalanda. Students and scholars from places like China, Central Asia, Korea and Tibet studied in this great vihara that taught Mahayana, Hinayana, Sanskrit grammar, Vedas and Samkhya among others. Imminent pilgrim monks like Hiuen Tsang and I-tsing from East Asia visited this place in the 7th century. Recognised by UNESCO as a World Heritage Site, Nalanda not only boasts of being one of the most revered Buddhist tourism sites in India but also continues to draw attention from scholars, historians and archaeologists. 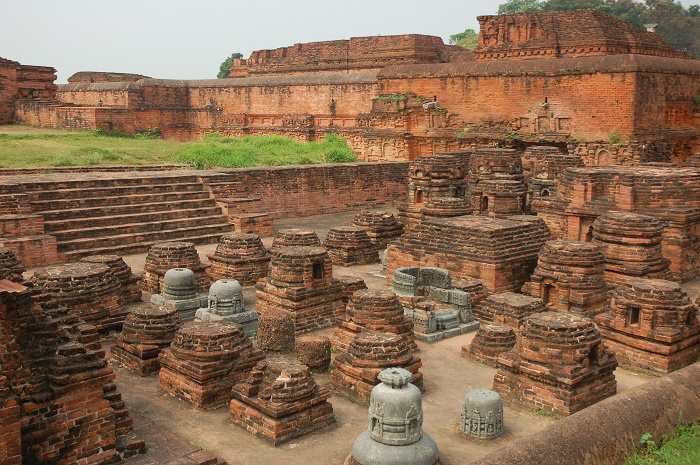 Nalanda was originally a thriving village close to Magadha’s capital Rajagriha (presently Rajgir) located beside a prime trade route. According to sources, Gautam Buddha gave away lectures in a close-by mango grove called Pavarika and Jain thirthankara, Mahavira also stayed at Nalanda for about fourteen rainy seasons thus validating the existence of the place to as early as the 5th–6th century BCE. The Tibetian Lama Taranatha of the 17th century mentioned that a huge temple was constructed at the site of chaitya of Shatiputra at Nalanda by the great Indian emperor of the Maurya Dynasty, Ashoka who later embraced Buddhism. Taranatha also stated that Nagarjuna, a 3rd-century CE luminary and Mahayana philosopher remained chief of the institution while his contemporary, another luminary Suvishnu constructed around 108 temples in the area. Various theories exist regarding the naming of the place. While Hiuen Tsang asserted that it was derived from ‘Na alam d?’ meaning charity without intermission or no end in gifts, I-tsing believed it came from ‘N?ga Nanda’ where naga refers to a snake in the local tanks whose name was Nanda. The travelogues of these two Chinese monks gave most of the information that could be gathered about Nalanda prior to the 8th century.

How to Spend 48 Hours in Kolkata

The Media Should Be Ashamed Of Their Coverage Of Tigress Avni’s...

ABOUT US
Newspaper is your news, entertainment, music fashion website. We provide you with the latest breaking news and videos straight from the entertainment industry.
Contact us: office@yoursite.com
FOLLOW US
© Newspaper WordPress Theme by TagDiv
MORE STORIES